Your bucket list just got bigger. Located halfway between South Africa and Antarctica, the French Southern Territories are some of the least visited islands on Earth. And if you want a travel experience that is genuinely like no other, then make this your next voyage. Birders will no doubt be in their element here, with species upon species of rare and remarkable birds to be found on the islands - think Amsterdam Albatrosses and Kerguelen Pintail.

Cape Town, South Africa
If you visit only one place in South Africa, make it Cape Town. Whether you're partaking of the Capetonian inclination for alfresco fine dining (the so-called Mother City is home to many of the country's best restaurants) or sipping wine atop Table Mountain, you sense - correctly - that this is South Africa's most urbane, civilized city. Here elegant Cape Dutch buildings abut ornate Victorian architecture and imposing British monuments. In the Bo-Kaap neighborhood, the call to prayer echoes through cobbled streets lined with houses painted in bright pastels, while the sweet tang of Malay curry wafts through the air.

Port Elizabeth, South Africa
Port Elizabeth, or PE, may not have the range of attractions found in Cape Town or on the Garden Route, but it's a pleasant town that's worthy of a few days' exploration. There are some beautiful beaches (although you'll need to visit them early in the day in summer as the wind tends to pick up by midday) and some wonderfully preserved historic buildings in the older part of the city, called Central. A large part of the town's charm lies in its small size and quiet environment, but PE is not a total sleepy hollow. If you feel the need for a bit of nightlife, head to the Boardwalk complex near the beach, for its restaurants, cafs, theater, and casino, or to Parliament Street in Central, which has recently been pedestrianized and has a vibrant restaurant and nightlife scene. PE is a good base for exploring some other fantastic destinations, both wild and cultural, including Addo Elephant National Park.

Crozet Islands
The Crozet islands are a sub-antarctic archipelago of small islands in the southern Indian Ocean. They form one of the five administrative districts of the French Southern and Antarctic Lands. There are six islands in the Crozet group, all are uninhabited except for the Port Alfred research station on the east side of Possession island. The Crozet islands are home to four species of penguins, fur seals and Southern Elephant Seals. Killer whales have also been observed preying upon the seals. Sea birds include Black-faced Sheathbills, petrels, and albatross, including the Wandering Albatross.

Kerguelen Islands
The Kerguelen Islands also known as Desolation Island, are a group of islands in the southern Indian Ocean. The islands are a territory of France. There are no indigenous inhabitants, but France maintains a permanent presence of 50 to 100 scientists, engineers and researchers. The main island of the archipelago is called La Grande Terre. It measures 150 km east to west and 120 km north to south. The main base, the so-called capital of the islands, is located at the eastern end of the Gulf of Morbihan on Grande Terre island and is known as Port-aux-Franais. The highest point is the Gallini Massif (Pic du Grand-Ross), which lies along the southern coast of the island and has an elevation of 1,850 meters. The Cook Glacier, which covers approximately 403 km, lies on the west-central part of the island. Grande Terre has numerous bays, inlets, fjords, and coves, as well as several peninsulas and promontories.

Port Louis, Mauritius
Located just off the east coast of Madagascar, Mauritius is fast making a name for itself as the tropical paradise of the Indian Ocean. A volcanic island approximately 10 million years old, Mauritius is thought to be the peak of an enormous sunken volcanic chain stretching from the Seychelles to Runion. In fact, volcanic lakes and inactive craters can be found scattered throughout the island. Mauritius also boasts a unique marine environment. Surrounded by one of the largest unbroken coral reefs on the planet, conservationists are now campaigning to protect its white coral sand beaches and fragile ecosystem. Though it can be found on the maps of early Arab mariners, Mauritius remained uninhabited until the end of the 16th century. Portuguese became the first European visitors in 1510, however, they did not lay claim to the island. In 1598 Dutch colonists settled on the island, naming it after Prince Maurice of Nassau. 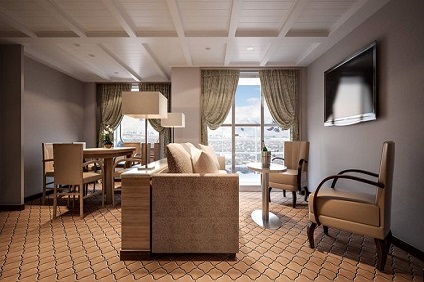 This stylish apartment offers the superlative in levels of space, comfort and service on board. A perfect mix of expedition experience with luxury lifestyle.
Available as a one-bedroom configuration or as two bedroom by adjoining with a Vista Suite. 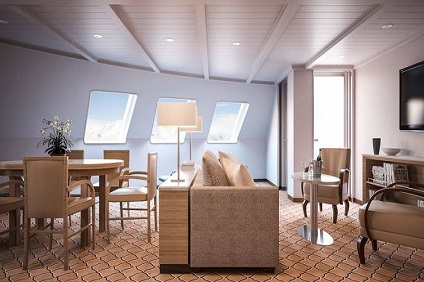 Expertly designed and exquisitely appointed. The ideal space for sharing stories with fellow explorers and new friends. With enough space to roam both in and outside, this suite is perfect relaxing and recounting the highlights of your day.
Available as a one-bedroom configuration or as two-bedroom by adjoining with a Veranda Suite. 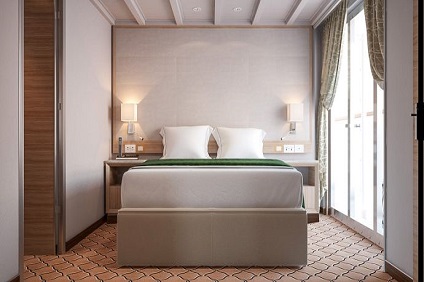 Stately. Commanding and majestic. Perfect for relaxing after a days’ exploring and looking through your photos. With lectures being streamed live to your room, this is the pinnacle of good living at sea.
Available as a one-bedroom configuration or as two-bedroom by adjoining with a Veranda Suite. 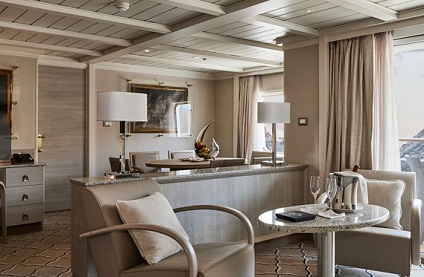 This stylish apartment offers the superlative in levels of space, comfort and service on board. A perfect mix of expedition experience with luxury lifestyle. Available as a one-bedroom configuration or as two bedroom by adjoining with a Vista Suite.

Images are intended as a general reference. Features, materials, finishes and layout may be different than shown. 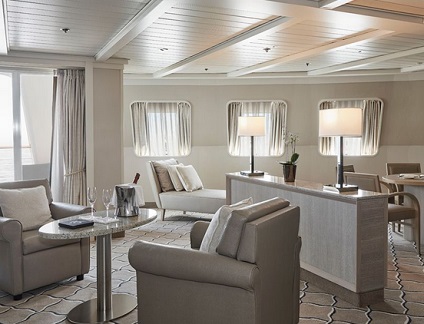 Expertly designed and exquisitely appointed. The ideal space for sharing stories with fellow explorers and new friends. With enough space to roam both in and outside, this suite is perfect relaxing and recounting the highlights of your day. Available as a one-bedroom configuration or as two-bedroom by adjoining with a Veranda Suite.

Images are intended as a general reference. Features, materials, finishes and layout may be different than shown. 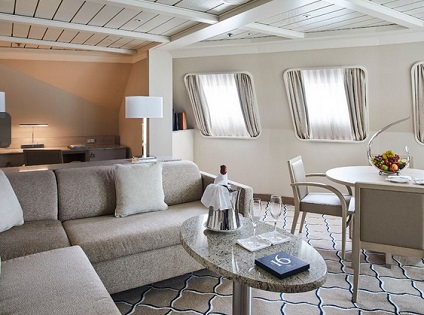 Stately. Commanding and majestic. Perfect for relaxing after a days’ exploring and looking through your photos. With lectures being streamed live to your room, this is the pinnacle of good living at sea. Available as a one-bedroom configuration or as two-bedroom by adjoining with a Veranda Suite. 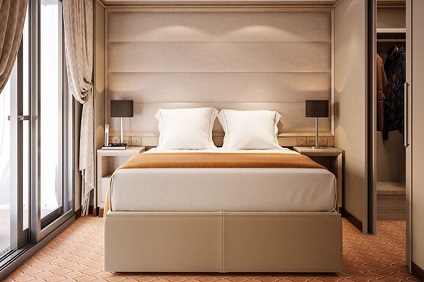 Stylish and sophisticated with larger verandas, excellent for taking pictures and bird-watching. Situated midship, this suite is perfection in design and comfortable living. A huge walk in wardrobe, a beautiful marbled bathroom and a spacious living area completes the picture.
Silver Suites accommodate three guests. 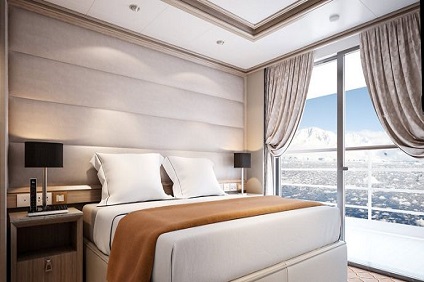 With a room configuration that favours watching the sun rise from the comfort of your bed and losing yourself in the mesmerising seascapes, this suite is the perfect answer to adventure cruising. A large walk-in wardrobe, and an expansive living make the Medallion Suite a your home away from home on the high seas.
Medallion Suites accommodate three guests. 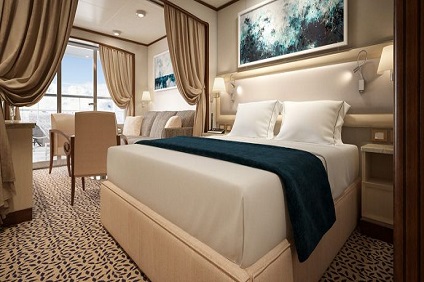 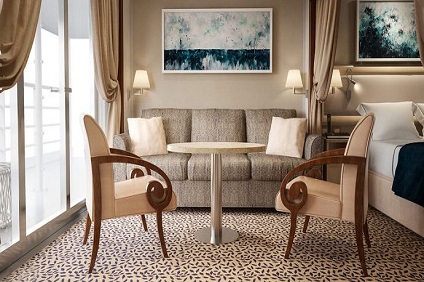 A Silversea signature, the Veranda Suite is spacious and welcoming. Floor-to-ceiling glass doors open onto a furnished private teak veranda from where you can contemplate anything from the midnight sun to an antarctic sunrise.
Some Veranda Suites accommodate three guests (Suites going from 505 to 510
and from 605 to 610). The Deluxe Veranda Suite offers preferred central
location with identical accommodation to a Veranda Suite. Your home away from home while you embrace the intrepid explorer within. The suite’s seating area has plenty of room to relax while you go over your notes, ready for the next adventure. Large picture windows frame panoramic ocean views, ideal for appraising the local wildlife. With 18-brand new Zodiacs, the only Relais & Chateaux restaurant in Antarctica and a pole to pole expedition itinerary, Silver Cloud really does break the ice between expedition and luxury.

After extensive refurbishment, Silver Cloud is the most spacious and comfortable ice class vessel in expedition cruising. Her large suites, her destination itineraries and her unparalleled service make her truly special. Her four dining options will tantalise your taste buds and as 80% of her suites include a veranda, watching a breaching whale or a few cavorting penguins has never been so personal. A limited number of guests in polar waters, mean that Silver Cloud has the highest space to guest and crew to guest ratios in expedition cruising. With her 18 zodiacs, 10 kayaks, possibilities are almost limitless with ship-wide simultaneous explorations.